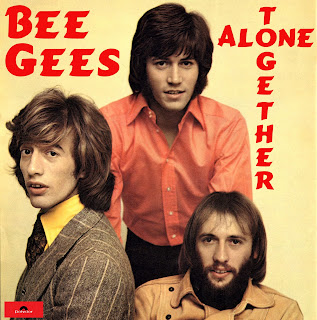 In March 1969, Robin Gibb quit the Bee Gees, leaving his brothers to carry on and record the album Cucumber Castle. Robin in turn recorded his debut solo LP Robin's Reign. Both acts had hit singles, but their respective albums didn't sell particularly well. Soon after Cucumber Castle's release, Barry Gibb announced he was going solo, leaving Maurice Gibb no other choice than to go solo as well.

All three brothers recorded solo albums in early 1970, and singles were chosen and album cover art created for all three. But it seems that all three Brothers Gibb had second thoughts about venturing out on their own, and all three solo albums were put on hold.

Initially, Robin and Maurice reunited and planned to record a new Bee Gees album, but soon Barry also rejoined the group and they recorded and released 2 Years On in November 1970. And the Bee Gees remained together until Maurice died in 2003.

What's intriguing to me is that the Gibb brothers not only abandoned their 1970 solo albums, but they didn't even re-record any of the songs for Bee Gees albums. Robin's solo album, Sing Slowly Sisters, remained unreleased until 2015 when it was included as part of the compilation Saved by the Bell: The Collected Works of Robin Gibb, 1968-1970. Maurice's and Barry's solo albums, The Loner and The Kid's No Good respectively, have to this day still not been released.

I wondered what could have been had the group instead of starting from scratch simply took the best tracks of their solo albums to create a new Bee Gees album. With Barry's and Maurice's albums unreleased, this would be difficult except that singles from the albums were released.

While Barry's album has not been released, a single was: "I'll Kiss Your Memory" b/w "This Time." Other tracks have trickled out on bootlegs. Of those, both "One Bad Thing" and "The Day Your Eyes Met Mine" were co-written with Maurice, so I thought they were good ones to include.

Maurice didn't usually have many lead vocals on Bee Gees albums, which is good because we only have two songs to use. Like Barry, while Maurice's album wasn't released, one single was: "Railroad" b/w "I'll Come Back."

For Robin's contributions, we have the whole solo album to choose from. I decided I wanted to equal the number of Barry's tracks. Two of Robin's songs were originally considered for singles, the title track and "Great Caesar's Ghost," so we include both. I also included "Engines, Aeroplanes" and placed it after Maurice's "Railroad" simply because I thought that was a humorous connection. And "C'est La Vie, Au Revoir" was slated to be the closing song of the album, and seemed appropriate for this as well.

I thought Alone Together was a fitting title for this album. For a cover, I wanted to do something artistic like creating one face from all three of their faces. But I was quickly reminded of my limitations as an artist and eventually scrapped the idea. Instead, I used a portrait from about that time period and added titles and record company logo. Not great, but OK.

Albums Back from the Dead

AEC
San Diego, CA, United States
Posting a new entry on the first Sunday of the month. I haven't uploaded the music files. Too many lawsuit-happy record companies and artist estates out there. Instead I list the sources for people to find the tracks themselves