Richard Berry is today primarily known for writing two songs that practically every garage band since the 1960s has at least performed if not recorded as well. Neither “Louie Louie” nor “Have Love Will Travel” were big hits for Berry when he originally recorded them. Although he did have some early success with groups, he never really had a big hit on his own. However, that didn’t stop him from recording music and releasing a string of singles beginning in the early 1950s through the early 1980s. Along the way, he produced a lot of good R&B, doowop and ballads.

The first attempt to produce an album of Berry’s music under his name was in 1963 when Crown Records issued Richard Berry and the Dreamers, which included tracks from singles he had recorded for both Flair and RPM record labels. In truth, Crown, Flair and RPM were all owned by the Bihari brothers and based in Los Angeles. By 1963, Berry was no longer recording for the Bihari companies. But the album was likely created in an attempt to capitalize on the fact that “Louie Louie” had become a hit for the The Kingman (even though Berry didn’t record “Louie Louie” for any of the Bihari labels and it didn't appear on this album).

But Berry recorded enough music between 1953 and 1963 on various record labels to make four full albums. 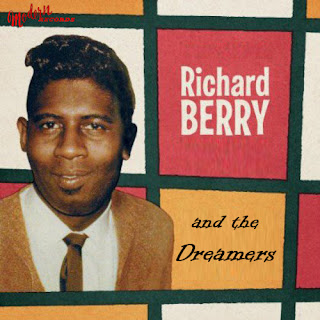 Richard Berry and The Dreamers (1955)

The Crown Records version of the album from 1963 included tracks that had been issued on both Flair and RPM labels. I redid this album using only tracks that were recorded for Flair. Therefore, my version only includes five tracks from the one actually released. However, while the real version only included three tracks that featured the female backup singers The Dreamers, this version includes all six tracks he did with them, making the album title more appropriate. And finally, while the original had 10 songs, I've included a dozen. All of these songs were originally released from 1953 through 1955.

One question I pondered is what label these albums would have or could have been issued on. Trying to untangle the Bihari record label businesses and make sense of it all is a chore. But basically, in the 1950s they released singles (45s and 78s) on their Modern, Flair, RPM, Meteor and Kent labels. LPs were released on the Modern label beginning in 1950, but they were mostly by jazz performers or collections by various artists. There was a plan for LPs on RPM beginning in 1957, but that ended after only one album. A new Bihari label, Crown Records, began issuing budget LPs, but not until 1957. I decided with few options in 1955, that had it been released at the time, the first Berry album would likely have been on the Modern label, and I used that label's logo on the cover. 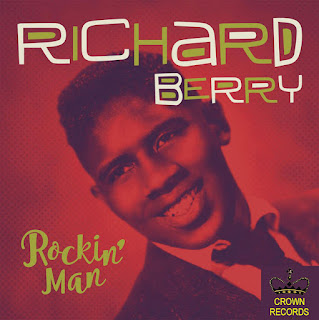 This is a second imagined album from Berry, using mostly tracks he recorded for RPM, but also two leftovers from Flair. And since both labels were owned by the same company, that shouldn’t be a problem. In fact, I predict this would have been issued on the Crown Records label in 1957. This album is shorter by two songs than the previous album, and without the backup of The Dreamers. For a cover, I used a picture sleeve from an EP issued by El Toro Records in 2017 and changed the record company logo. 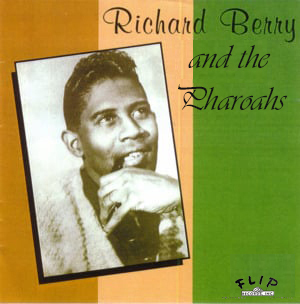 Richard Berry and The Pharoahs (1960)

2. You are My Sunshine

1. Have Love Will Travel

Berry left the Bihari organization in 1957 for Flip Records. While primarily a singles label, Flip did release two LPs (in 1959 and 1960) that were collections of the singles they’d released from a variety of performers. So at least in theory we could have this third Berry LP issued on Flip that included all his singles with his backing group The Pharaohs.

There was one Flip single with the songs “The Mess Around” and “Heaven on Wheels” from this time period credited to Richard Berry and The Lockettes, a group of female singers. And another Flip single credited solely to Berry including the songs “Besame Mucho” and “Do I Do I.” Since the Pharaohs aren’t credited on these tunes, and since we already have 12 tracks that are, I left them off this LP. Which is kind of a shame, because I really like them all, especially “Heaven on Wheels,” a rockin’ car song. For a cover, I used one made for an Ace Records compilation and edited it a little. 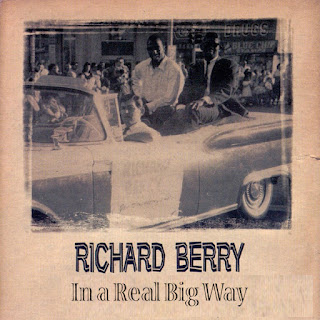 3. Everybody's Got a Lover But Me

7. Dreams of an Angel

Although Flip Records continued to issue a couple more Berry singles in 1961 and 1962, Berry appears to have left the label in 1960. Over the next several years he released a number of singles on a wide variety of tiny labels, including Paxley, K&G, Hasil, Smash, Ray Co., AMC, Arc and C-Ray. These were likely records made to sell at shows. I collected 14 songs from singles released through 1963 to create this album, In a Real Big Way.

All the tracks for these four imaginary albums can be found on compilations: Yama Yama! The Modern Recordings 1954-56 and Have "Louie" Will Travel: The 1956-62 Recordings.

Albums Back from the Dead

AEC
San Diego, CA, United States
Posting a new entry on the first Sunday of the month. I haven't uploaded the music files. Too many lawsuit-happy record companies and artist estates out there. Instead I list the sources for people to find the tracks themselves